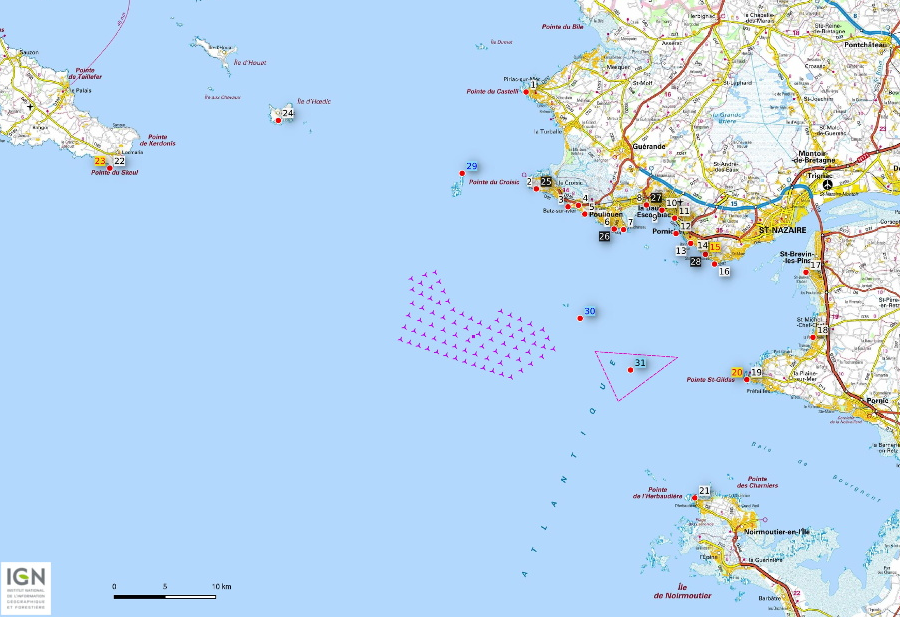 1- The first of its kind in France, the Saint-Nazaire offshore wind farm was officially launched on 19 September 2019. What are the next steps in the construction process?

Orders have been placed with our sub-contractors, and manufacturing is under way on the components. In 2020 the most visible developments will be the construction of the maintenance centre at the Port de la Turballe and the construction centre in Saint-Nazaire starting in September 2020.
Installation work will begin at sea in early 2021. The first stage will be to lay the foundations, while also installing the cables which will connect the turbines. The offshore electrical substation will also be installed in Summer 2021. The first turbines will be installed in early 2022. The wind farm will come online progressively, and the project will be fully completed by the end of 2022. The farm is expected to be operational for 25 years, with day-to-day maintenance conducted from the Port de la Turballe.
The Saint-Nazaire offshore wind farm will comprise 80 turbines, each producing 6MW, positioned one kilometre apart and located between 12 and 20 kilometres offshore. The farm will produce enough power to cover 20% of total electricity consumption in the Loire-Atlantique region.

2- Which companies will be involved in the different phases of building this new wind farm?

The company ‘Parc du Banc de Guérande’ is the official owner of this project, and in turn the company is jointly owned by EDF Renewables and Enbridge. They have developed the project, are currently coordinating the construction process and will subsequently be responsible for running it. The company announced its main industrial partners last summer:
-    The turbines will be supplied by General Electric Renewables and installed at sea by Sodraco, a subsidiary of the Jan de Nul group. The nacelles and generators will be assembled in the Montoir-de-Bretagne factory, near Saint-Nazaire.
-    As for the foundations, they’ll be manufactured and installed by a consortium comprising Eiffage Metal, DEME Offshore and SDI.
-    The cables will be fabricated by Prysmian in their factories in central France, and installed at sea by Louis Dreyfus Travocean.
-    The offshore sub-station is currently under construction at Chantiers de l’Atlantique in Saint-Nazaire, in partnership with GE Grid Solutions, and will be installed by SDI.
Finally, RTE is the chief contractor for the connection of the cables from the offshore sub-station to the onshore electricity grid.

3- How many local businesses will be involved in the project?

Our objective is to put our principal suppliers in touch with local businesses. Since the project was first announced in 2012, Parc du Banc de Guérande has been working to identify and nurture the development of 300 companies based in the region.
For example, in partnership with the Neopolia business network and the Nantes St-Nazaire chamber of commerce, we organised a networking event in October 2019 for 250 companies, setting up 320 meetings with our suppliers.
Les Chantiers de l’Atlantique have also just announced new contracts with four local firms (ADF, CNI, TechnoSolutions, Soreel), who will be involved in the construction of the offshore sub-station.
Calls for tender are regularly published on the CCI Business platform, so that interested companies can get all the information on upcoming contracts.

4- Nantes Saint-Nazaire will soon be home to France’s first offshore wind farm. What is the potential impact for local business, in terms of new jobs?

This is a very dynamic region. As I mentioned, 250 local businesses took part in our networking event in October, and that gives you some idea of the immense economic potential of the Pays de la Loire in the offshore wind sector. In terms of jobs, 1000 people will be employed during the construction phase, with a hundred permanent jobs created for the running and maintenance of the wind farm out of La Turballe. Moreover, with 773 jobs in this sector in the region, out of a total 2085 in France as a whole, the Pays de la Loire is the country’s leading region for employment in the marine renewable energy (MRE) industry, according to a report published by the Marine Energy Observatory in 2019.
This also represents a fantastic opportunity for local businesses to showcase their expertise. For example, Les Chantiers de l’Atlantique will be building not just the sub-station for this wind farm, but also new sub-stations for two more wind farms off the French coast, at Courseulles-sur-Mer and Fécamp. And the GE factory in Montoir de Bretagne will only be assembling new-generation turbine nacelles and generators.

5- What is your view on the potential of MRE in France?

The potential for developing marine renewable energies in France is massive. A total of 7 permanent offshore wind farms will be installed off the French coast over the next few years. Last year at the Assises de la Mer conference, the French President reaffirmed his commitment to developing and solidifying the offshore wind energy sector for the future, announcing new calls for tender to produce another 1 GW of power annually. The Saint-Nazaire wind farm is a significant milestone in the creation of a thriving “marine renewable energy” sector in France. We are absolutely convinced that offshore wind power will have a crucial role to play in France’s energy mix between now and 2030.

Find out more about the wind farm: http://parc-eolien-en-mer-de-saint-nazaire.fr/

Antoine ADAM
Business development manager- Manufacturing
+33 (0)6 07 75 52 32
Published on 22/01/2020
EMR, Saint-Nazaire
EMR
Find out more
On the same theme
In 2023, an armada of maritime events in Nantes and Saint-Nazaire
Marine bio-resources: “Microalgae contain all the ingredients necessary for life”
In Saint-Nazaire, the start-up Blu Eat makes microbiota a real treat
See all news
Events
The Arch
Wind for goods
See all events
@investnantesSN