OFFSHORE WIND FARM: THE MOST POWERFUL ELECTRICITY SUBSTATION IS BEING BUILT IN SAINT-NAZAIRE! 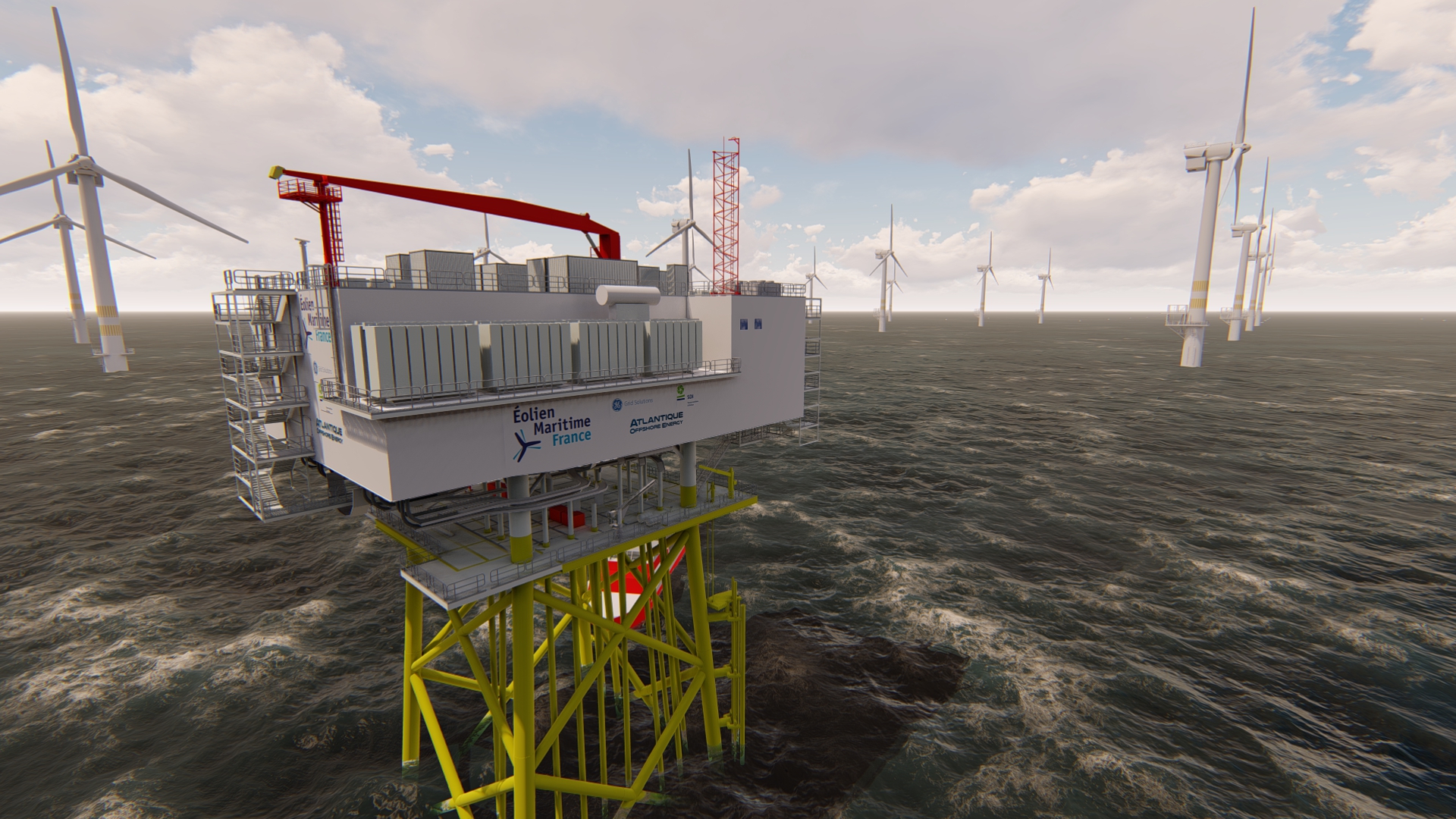 Better known for building cruise ships, the Chantiers de l'Atlantique shipyard has diversified in recent years and got involved in making electricity substations for offshore wind farms throughout the world. It won the contract to build the one that will be incorporated into France’s leading wind farm in Saint-Nazaire. Building has just got under way. Several hundred people and subcontractor companies are working to ensure delivery in 2021.

The first stage of the building of the electricity substation to be installed on the Banc de Guérande offshore wind farm came in January, when the first sheet metal cuts were performed in the workshops of Chantiers de l’Atlantique.

“The substation, which we refer to internally as S34, is not the biggest (2,000 tonnes, whereas the one in Arkona, Germany, is 4,000 tonnes), but it will be the most powerful, generating 480 MW. It is to be used by our client, Eolien Maritime France, which is a subsidiary of EDF Renouvelables  and Enbridge,” explains Frédéric Grizaud, the director of the Marine Energy Business Unit of Chantiers de l’Atlantique. Made in Saint-Nazaire for the consortium GE Grid Solutions, SDI (for transport and installation) and Chantiers de l’Atlantique, this substation is scheduled to leave the shipyard in the summer of 2021 and be connected up to the wind turbines in 2022.

400 jobs directly created by the project

The Marine Energy Business Unit of Chantiers de l’Atlantique has 200 employees, all of whom are currently involved in building this substation. “This workforce is doubled by the contributions of 200 workers from external companies, who have been assigned to the project for durations ranging from six to nine months to work in sectors such as mechanical construction, architectural metalwork, electricity, pipe fitting, interior layouts and so on - basically, all the trades that Chantiers de l’Atlantique draws on when building ships.” And in 2020, a further fifteen positions are to be filled in the Marine Energy Business Unit at Chantiers de l’Atlantique. Another creator of local jobs is Éolien Maritime France, which will operate the substation with its own teams from its maintenance base in La Turballe.

"And in 2020, a further fifteen positions are to be filled in the Marine Energy Business Unit "

Many companies are working on this building site alongside the consortium. “Some of these companies have been with us since the start of the adventure and have chosen to go down the same diversification path as us, including Johnson Control International, ADF-CO and Soreel.” says Grizaud. The budget assigned to suppliers currently stands at €8m and more invitations to tender will be issued soon for electricity and metalwork services. “Proximity matters!” continues Grizaud. Obviously I mean geographic proximity, as that makes logistics easier, which is an important consideration given the large size of the components we are assembling. But I also mean human proximity! Here there is a whole ecosystem conducive to industry. The regional and local authorities all contribute to this proximity by making available to us infrastructure that is essential for the project’s success (improving the port quays, roads and broadband network, and so on).”

80% of orders are for export

By making the most of its well-earned reputation for shipbuilding, Chantiers de l’Atlantique set itself apart from competitors. “Despite our late arrival into the market – ten years after our competitors -, we are recognised as among the best in Europe and our product sets standards,” says Grizaud. “The competition remains fierce and we will have to continue to compete hard and offer innovative and reliable solutions. At the moment 80% of the orders placed with the substation are for export but we hope to reach a figure of 50% for the domestic market and 50% for exports within a few years.” The consortium has already been selected to build two more substations in France – in Fécamp, where delivery is due in 2022, and Courseulles-sur-Mer, where delivery is scheduled for 2023. Both of these are for the same client, Eolien Maritime France. “The fact that we have a degree of certainty for the next three years enables us to sustain 400 or so jobs generated for the project in Saint-Nazaire,” concludes Grizaud. And that can only make the renewable marine energy sector in Nantes and Saint-Nazaire even stronger.

> Watch a video about the substation
AOE CORPORATE VIDEO (VF-STENG) from CHANTIERS DE L'ATLANTIQUE on Vimeo.

See you at the SEANERGY forum in Nantes (postponed)!

Antoine ADAM
Business development manager- Manufacturing
+33 (0)6 07 75 52 32
Published on 21/02/2020
EMR, Saint-Nazaire
EMR
Find out more
On the same theme
In 2023, an armada of maritime events in Nantes and Saint-Nazaire
Marine bio-resources: “Microalgae contain all the ingredients necessary for life”
In Saint-Nazaire, the start-up Blu Eat makes microbiota a real treat
See all news
Events
The Arch
Wind for goods
See all events
@investnantesSN