MÉDIACAMPUS: A NEW SITE DEDICATED TO MEDIA IS OPENING ITS DOORS ON THE ÎLE DE NANTES 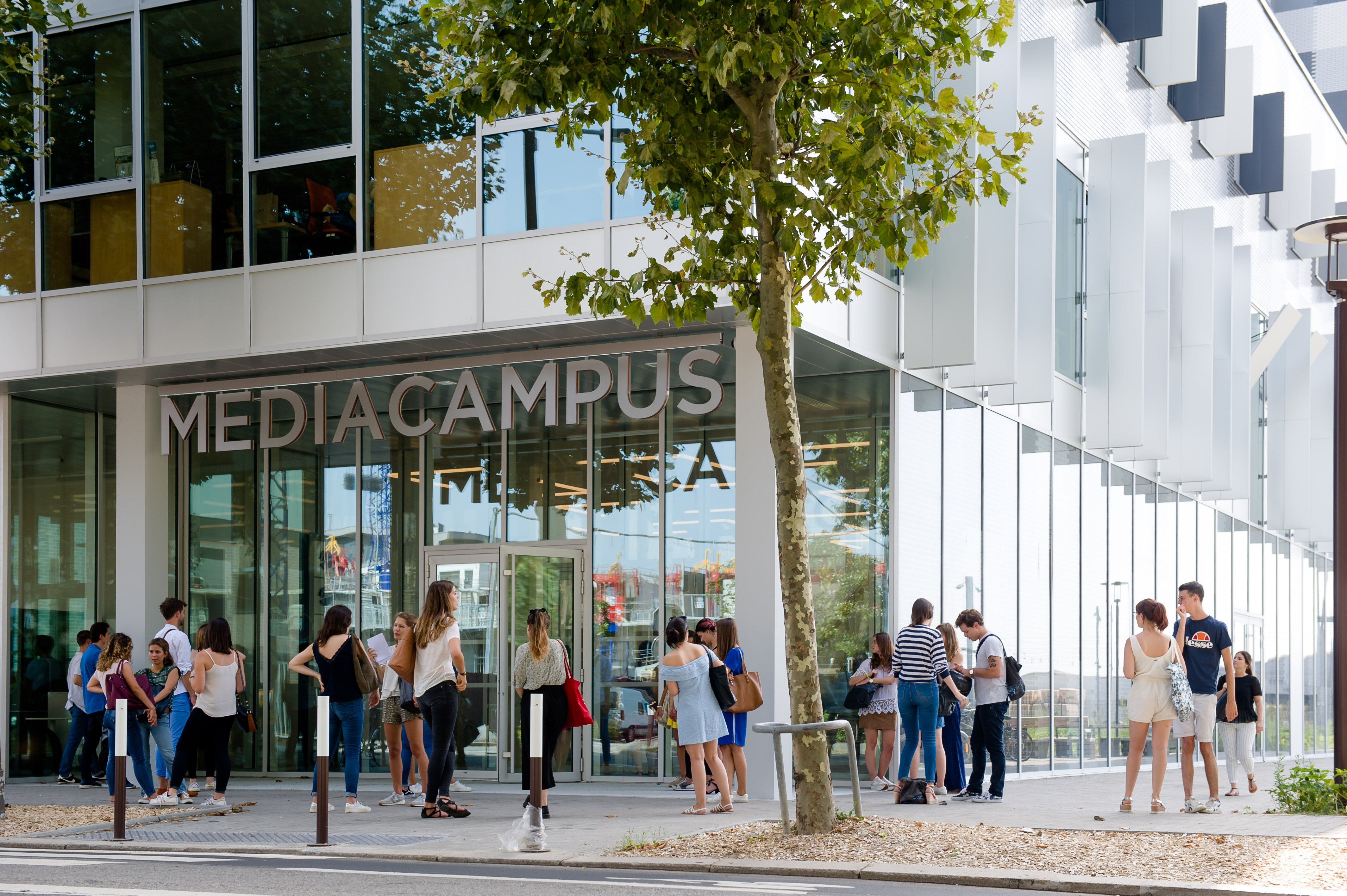 Last building to be delivered in the Quartier de la Création on the Île de Nantes, MEDIACAMPUS opened its doors in September to 450 students for this coming academic year.

A totem building has just opened on the Île de Nantes where students, researchers, professionals, freelancers and employees from the world of media can all work together. In this unusual 5-storey, 6000 m² building located in the heart of the Quartier de la Création on the Île de Nantes, the Médiacampus deserves its name. Since the start of September, it has hosted a communication school (Audencia Sciencescom), a local television station (Télénantes) and several communication and media companies as well as professional associations (Club de la Presse, APCOM).

A place of research

Experimentation: the DNA of Médiacampus

"MEDIACAMPUS is a new type of research and education instrument: a place where those who do and those who will do can meet. A place of exploration to play with digital technologies, test new teaching methods, implement new partnerships", declares a teacher.

An acceleration platform, MEDIACAMPUS is designed to promote prototyping, experimentation and hybridisation of skills. It hosts several projects including a Datajournalism Hyblab, a "Télénantes Academy", a "CityLab Alliance", etc. distributed over coworking spaces accessible to communication and media professionals and a 700 m² CCI Enterprises Space to welcome companies and professional associations working in the world of media and communication.

A European centre of excellence at Nantes

The Quartier de la Création covers an area of fifteen hectares hosting a European centre of excellence in the field of cultural and creative industries, combining communication, design, performing arts, architecture and visual arts. MEDIACAMPUS is located on a campus of over 4000 students and 1500 direct jobs, alongside the École Nationale Supérieure d’Architecture de Nantes, the École de Design, Cinécréatis and emblematic digital conversion sites (Stereolux and its laboratory dedicated to digital arts, La Fabrique, etc.). The current rehabilitation of Les Halles will contribute to this dynamic movement with the arrival of the new School of Fine Arts, a university centre dedicated to digital cultures, a hotel of creative companies, the Creative Factory and the new Cantine Numérique.

The Communication media sector represents nearly 18 000 jobs and 3000 companies in the Pays de la Loire region. For the entire Western France region, the figures rise to 7300 companies and 44 000 jobs.

Published on 18/09/2017
Attractiveness, Creative industries, Digital
On the same theme
Successful funding rounds in 2021 for SDG-drivent startup
Californian Start-up "Vectice" to set up in Nantes
THE INTERNATIONAL SCHOOL OF NANTES IS EXPANDING
See all news
Events
FORUM PROJETS URBAINS
See all events
@investnantesSN