Marine bio-resources: “Microalgae contain all the ingredients necessary for life” 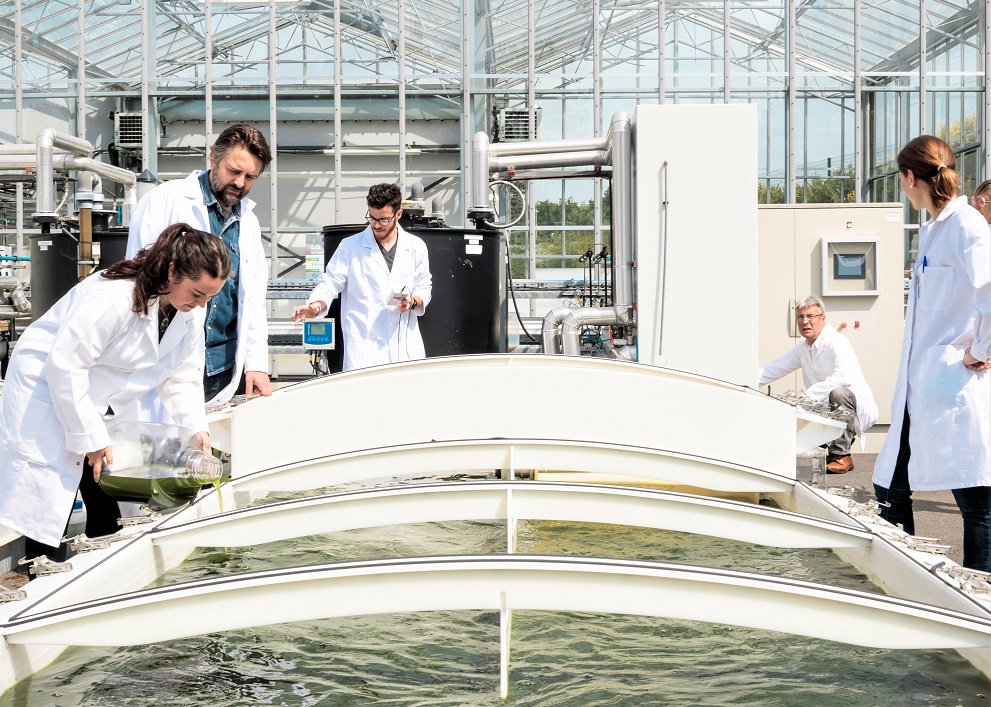 Microalgae to boost the immune system, treat water, or feed fish in desert countries... Ranked among the top 12 worldwide in microalgae research, the GEPEA laboratory in Saint-Nazaire is racking up projects with various start-ups and large firms with growing interest in developing this very promising ingredient in terms of nutrition. We met with GEPEA lab director Jérémy Pruvost and associate director Pascal Jaouen.

What is the GEPEA laboratory?

It is a public research laboratory based in Saint-Nazaire and Nantes which brings together different institutions (Nantes Université, Oniris, IMT-Atlantique) and the CNRS. Our area of expertise is process engineering; in other words, we’re interested in the challenges linked to developing new processes, new technologies and new applications for the industry of the future. We have over 220 people, including about 50 in Saint-Nazaire, specialised in bioprocesses utilizing microalgae, a scientific angle and expertise that are unique in France. When a microalga shows nutritional potential, for example, our work involves setting up processes to farm it on an industrial scale. We develop culture systems and extraction processes (biorefinery) for compounds of interest — such as proteins, pigments or lipids — in order to design an optimised industrial production chain, while minimising the environmental impact and energy consumption.

The GEPEA laboratory in Saint-Nazaire is world-renowned for its work on microalgae. How did this particular focus on microalgae come about?

When we started our research on bioprocesses in Saint-Nazaire in the mid-1980s, microalgae were almost exclusively used to feed oysters, clams and other bivalves. There are a number of aquaculture farms and hatcheries in western France, which allowed us to expand, working with the IFREMER Nantes station in Bouin, for example. Just 20 years ago, the GEPEA also began collaborating with the European Space Agency on the use of microalgae for life support systems in space (circular engineering). The interest in microalgae in human nutrition is more recent. Microalgae were shown to be rich in protein, polyunsaturated fatty acids and polysaccharides, while companies like AlgoSource — with expertise in spirulina and its antioxidant components — were taking interest in it. There are millions of species of microalgae and barely a hundred are harvested on an industrial scale.

What are the nutritional features of microalgae?

Microalgae are very high in protein and provide many trace minerals and vitamins (B12) which can supplement a vegetarian diet, for example. Microalgae can also have specific effects on the body and be used as a supplement to boost the immune system, or to promote recovery during chemotherapy. The clinical study is currently being piloted and co-funded by AlgoSource in partnership with several university hospitals in France.  In terms of nutrition, manufacturer requirements are increasingly specific. Sources of protein for athletes in the form of powder, capsules and drinks are also being explored.

The major agri-food groups (human nutrition and animal nutrition) are now all interested in microalgae — to make butter, for example, or to produce oils rich in omega-3 to lower cholesterol. One advantage of microalgae is that they are odourless, unlike fish oil. Spirulina can now even be found in food for dogs and racehorses.

Are microalgae now being used as a source of protein the way meat used to be?

Absolutely. Microalgae don’t require pesticides, and use very little water and little space to grow. If both fresh and salt water can be used, there’s an advantage in terms of water scarcity in being able to use salt water. We’re working with Qatar, for example, which currently imports 90% of its food from other countries. Qatar can leverage microalgae because of the country’s extensive coastline, sea water, sunshine and desert landscape. They are developing fish farming in the desert using microalgae-based feed. Four Qatari researchers came to do research at GEPEA.

Quebec is also funding research to limit the use of antibiotics in aquaculture systems, another feature of microalgae. Last month, we welcomed an Australian researcher working on water treatment systems using microalgae, a topic on which Australia is some twenty years ahead of us. Like others (such as UCLA in the United States and the University of Tsukuba in Japan), they come to collaborate and are interested in our skills in terms of changing scale and integrating the entire production chain, including biorefinery. Across all our microalgae-related activities, we went from three theses in the 2000s to 20 theses per year today.

What will the extension of the AlgoSolis platform in Saint-Nazaire be used for?

AlgoSolis is a research and innovation platform that enables us to tackle the obstacles of transitioning to a pre-industrial scale. It therefore meets the current challenges of this emerging sector. What comes out of AlgoSolis can therefore be directly applied to industry. AlgoSolis is the link between academic research and industry. We are currently in the process of expanding AlgoSolis to keep up with growing project demand. We’re also considering new production capacities that can be applied to health, which require an extremely controlled environment (good manufacturing practices or GMP). The Pays de la Loire region is assisting us along the way, specifically by supporting the HealthPhase demo project, which is the preparatory stage for the extension, to the extent that innovative processes for using microalgae in health will be developed. This type of platform is a world first in developing how microalgae can be used in the field of health.

What future solutions can microalgae help to provide in terms of nutrition?

There are two kinds. In industrialised nations, it’s about finding products that complement existing products, with health benefits and a low environmental impact. In developing nations, the challenge lies in mass production — being able to produce in places facing severe constraints in terms of space or water stress. It isn’t surprising that this is happening in 2022; microalgae are the first link in the aquatic food chain and contain all the ingredients necessary for life. People were eating protein-rich dried microalgae wafers around Lake Chad centuries ago!

How well equipped is the region for bioresource firms looking to move to Saint-Nazaire?

While large groups may not necessarily have a reason to move — since they can outsource R&D for a given period (generally the duration of a CIFRE thesis, which is 3 years) within our structure — start-ups have a great need for proximity and responsiveness. They’re looking to interact quickly with a research team, train their future engineers and senior technicians (IUT or Nantes Université Ecole Polytech), and work in the lab. When you’re a start-up, you have to move fast on proof of concept in order to file patents quickly. We train their students, engineers, at all levels (from baccalaureate to post-doctorate levels), and without investing too much. And so we host several start-ups, such as Algolight and AGS Therapeutics. The start-ups are supported by a network of partners including Atlanpole and Pôle Mer Bretagne Atlantique. They’re also supported locally and in the field by Nantes Université’s Capacités subsidiary, which has created a “microalgae” team with 6 engineers and technicians based in Saint-Nazaire. The world of innovation envies this unique microalgae ecosystem, which is all in one place, with real interactions on a human, scientific and entrepreneurial level. The journal Algal Research ranked our laboratory among the top 12 worldwide in microalgae research and innovation.

In what way can microalgae provide a solution to high CO2 emissions?

It takes 1.6 kg of CO2 to produce 1 kg of microalgae. The GEPEA laboratory is working alongside AlgoSource, an SME, on the CimentAlgue project, which is an industrial demo at a cement plant in Montalieu, near Lyon. The CO2 emissions are recovered to feed spirulina ponds at that very same cement plant. A pollutant therefore becomes a nutrient for microalgae, and ultimately a source of food. Total Energies, a partner, also sees it as a way to produce biofuel in the long term.

Similarly, our lab is working on the SAVANE project, which aims to set up a demo in French Guiana to harness the highly favourable conditions in that part of the world for microalgae culture. It should be one of, if not the largest in Europe. The lab isolated a local strain in French Guiana a few years ago, and that will be cultivated in addition to spirulina. It’s a bit of a coincidence, but our studies have shown that its potential for biofuel is real!